Demonetization or demonization of Indian economy?

For obvious reasons, demonetization is one of the most talked about subject in the last six months. There is so much written about it, that finding my blog via a regular Google Search is hard. Of course, the government cannot accept it, even though it is morally obligated to accept something that goes wrong.

I am sure all Indians know of the demonetization move by the Government of India. There was a huge ruckus on the streets as ATMs ran out of cash. So many wasted productive hours in queuing up for the much-needed cash to go through about their lives. In one swift move. Life has changed.

Comedian Kunal Kamra explains the situation is the aptest manner in this video here. Before this government came into power, one of the most profound campaign subjects was corruption and Swiss bank money. The promise of taking money from Swiss bank accounts of Indians and distributing them to every Indian citizen was too firm. Alas, we saw nothing of it.

For obvious reasons, demonetization is one of the most talked about subject in the last six months. There is so much written about it, that finding my blog via a regular Google Search is hard. Of course, the government cannot accept it, even though it is morally obligated to accept something that goes wrong.

Sure, the impact was greatly felt by the common man. The same ones that Government was trying to protect and improve his livelihood. Being the large cash economy that we are, it is hard to live without currency. The merchants insisted on getting money in currency notes, and the onus was on us.

The digital currency that exists is, even today not preferred by retailers. I went to a hardware store the other day to buy RCB socket costing Rs. 1900. I asked him to take debit or credit card and he immediately said that I would have to pay 2% services charge.

I declined to pay 2% extra, and he asked to pay in cash. All other shops were charging me Rs. 2100 for the same product. I had little choice. So I went back to the shop and just by chance asked if he accepted Paytm. He said yes, and he won’t charge 2% extra. I paid from Paytm. For me, it is digital money. I don’t know how he is converting his digital money in PayTM.

He can pay his electricity bill from PayTM for no charge and would avoid paying tax on that income. He can transfer PayTM money to other numbers and stay below 20,000₹ limit to ensure he doesn’t have to furnish KYC.

How has government assessed demonetization performance?

In an earlier statement made during a parliamentary session, the government stated that found about 11 crores worth of fake currency.

In a more recent report, Rs. 15.44 lakh crore in banned currency notes deposited in banks (99% of the amount circulated). The 1% loss is worth Rs. 16,000 crores. Well, that does not sound much of a relief then, does it? Many of the notes that never made it back may have severely damaged (floods could cause it). Lost in places not found in time to deposit in the bank (I have 20 notes of Rs. 1000 at my home in a piggy bank) and many kept it as a souvenir (I know I did before I found these 20 notes).

There is every chance that 0.5% of the currency bills that never made it back to the system, is genuinely lost. Or purposely held back, but not for avoiding taxes. Essentially, of the total, approximate of Rs. 8000 crores may be the black money.

Why this move to demonetize went wrong?

What was worse is that Government introduced new Rs. 2000 and Rs. 500 notes as replacements instead. This move killed the initiative. In the immediately following days after announcing the demonetization, police made many arrests, including politicians, for hoarding the newly launched Rs. 2000 currency bill – when people were dying in queues to get even one. How did that happen? And who is to be blamed for it?

Instead, the government should have printed more of Rs. 100 notes and pushed people to go digital. It would have made people take up the digital mode of payment and stop using currency for all bulk transactions. All of the hawala transactions would have to be carried out at higher risk because of the volume of the notes they would need to bring.

Many people were allowed to submit up to 1 lac without attracting an investigation into their accounts by the Income Tax department. The government also invited those tax evaders to declare their income, pay taxes and convert their black money into white. While these did help a bit in collecting taxes from a certain number of people, these are such small amounts that government has not come forth with any figures. Rather, they have generalized that tax collections have improved.

It did have an impact on terror funding, but only till the time more currency notes were available. The tension in Jammu & Kashmir is still prevalent. The move helped banks by bringing in cash into the banking system, and therefore lowering the cost of loans – benefiting both citizens and banks alike. But at what cost?

And what about today, almost ten months after this monstrous (the size) move, we are yet nowhere near eradicating of practices the demonetization was intended to achieve. Merchants still insist on selling goods without a bill, transact in cash and charge an additional surcharge.

GST has further complicated matters, and its implementation has been sketchy. We, the common man, have not felt the impact of GST yet. The prices of products are still the same; numerous examples have surfaced where restaurants, who do not even have a GSTIN, charged GST on customer’s bills! There is rampant profiteering by many merchants, and still, Government is busy defending itself from the demonetization debacle.

As such, tax collection in India was always skewed and was never effective. Four industrial states make a lot more money in taxes and almost bear the brunt of getting far less in return. Here is an overview of a Bloomberg Quint report. 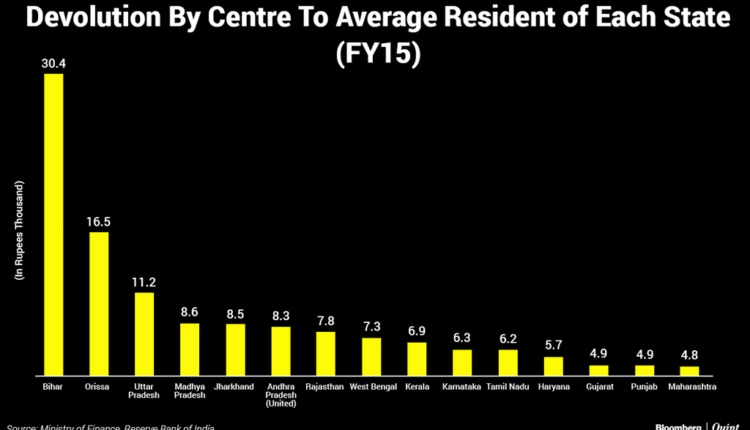 Bloomberg Quint - Devolution By Centre To Average Resident of Each State Bloomberg Quint - Per Capita Contribution To Central Taxes By State

The government has many steps to take to ensure that tax evading is not happening. Demonetization has in a way helped, with the new Rs. 2000 currency bill.

Do I fail to understand, as an ordinary man, why all this has happened? No, I don’t. Learnings from similar moves taken place in many countries never taken into consideration? Good intentions are welcome, but converting them into actions is the need of the hour.

Share your thoughts with me in the below comments section. Do you think it was demonetization or demon-ization of the Indian economy?

Floods in Mumbai, mockery of the sprirt

RE Himalayan BS4 (BSIV) FI Review – Is it good enough?

So what do you think about this article? Cancel reply

This website uses cookies to improve your experience. We'll assume you're ok with this, but you can opt-out if you wish. Accept Read More